When one thinks of a safari in Africa scenes of wild life in herds on vast open plains with the sun setting behind a beautiful acacia tree comes to mind. A pride of lion slowly walking in the twilight after a hunt, the sun catching their golden manes, and red-robed Maasai standing tall and still under a clear blue sky are all images that are typical of Kenya. Kenya is considered the birthplace of the safari and is still one of the best places to experience the beauty of Africa’s wildlife. Apart from the tradition open-vehicle safaris, in many wildlife parks in Kenya you can explore the wilderness by boat, on foot with guides, or even on horseback.

With over forty national parks and nature reserves in Kenya, it is difficult to pick the best as almost all have something special to offer with some of the best sightings of the big five in the world. Below are three of the top National Parks in Kenya that are not the biggest but are somewhat unique.

Masai Mara is undoubtedly the best known wildlife reserve in Kenya and is world famous for its annual Wildebeest migration. The park has an abundance of grasslands and wide open vistas that make it excellent for spotting big game like cheetah, leopard, and lion. Game viewing at Masai Mara reaches a peak with the arrival of tens of thousands of wildebeest around July for the annual migration. Wildlife enthusiasts can witness the amazing spectacle of millions of wildebeest and zebra as they move in unison to search for fresh pasture between July and October, crossing rivers and falling prey by the hundreds to predators.

The only downside is that the popularity of the park during the migration season makes it very crowded. For this reason it is highly recommended to stay at one of the private conservancies neighboring the park. The extra money you pay will be well worth it as you will be rewarded with an exclusive safari experience that includes off-road driving activities that are great for up-close game viewing, bush breakfasts in the wild, and Maasai-led safaris on foot. None of these activities are available or allowed in the National Park.

Experience the breathtaking view of wild game like elephant and giraffe against the magnificent backdrop of the snow-capped Mount Kilimanjaro, the highest mountain in Africa. A relatively small park, Amboseli has a wide range of landscapes covering delta-type swamps to dry savannahs. There are more than a thousand protected elephants in the park, among which are the some of the largest tuskers in Africa, as well as lion, buffalo, zebra, giraffe, and several species of antelope. The most spectacular view of all is the scene of the mountain towering over sun-bake plains which can clearly be seen even though Mount Kilimanjaro is actually situated in the neighboring country of Tanzania. 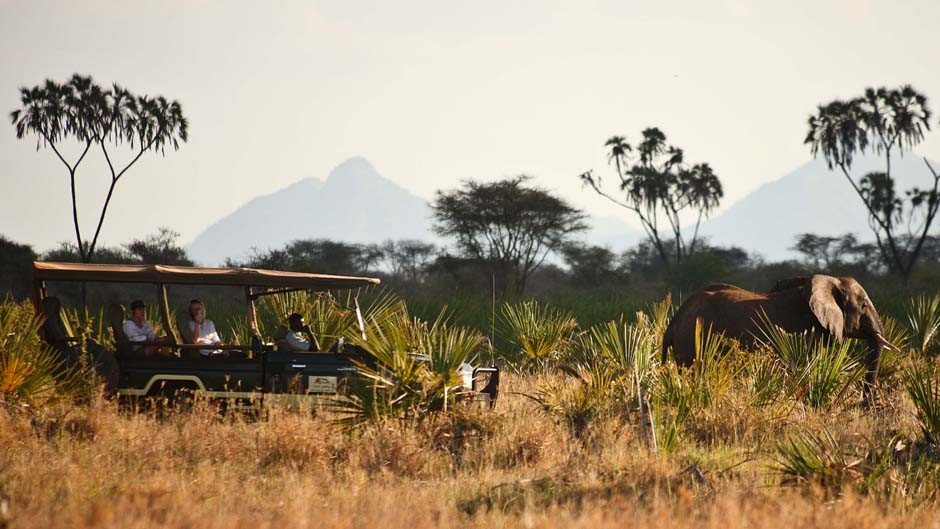 The magnificent un-spoilt wilderness in the Meru National Park was home to Elsa the Lioness. Not as popular as Masai Mara, this wild and beautiful national park still has plenty of wildlife without the crowds. The reserve is particularly famous for its rhino sightings as it has an enormous fenced-off rhino sanctuary for the protection of the rhino, the most hunted animal by poachers in Africa. All the other big game animals are easily sighted, including elephant, buffalo, and the big cats. Elsa’s Kopje is a luxury, award-winning game lodge situated near the remains of the original site where Joy and George Adamson raised the lioness Elsa from the book “Born Free” that later became a famous classic film.

The quality of the wildlife reserves and game parks in Kenya are what make it one of the most popular safari destinations in Africa. Safaris in Kenya are much more affordable than equivalent safaris in neighboring African countries, but this is not the only thing that attracts thousands of visitors every year. Highly qualified and experienced Kenyan Safari Guides enable tourists to have an exclusive wildlife safari experience and Kenya’s National Wildlife Reserves and Parks offer the best opportunities to view the Big Five.